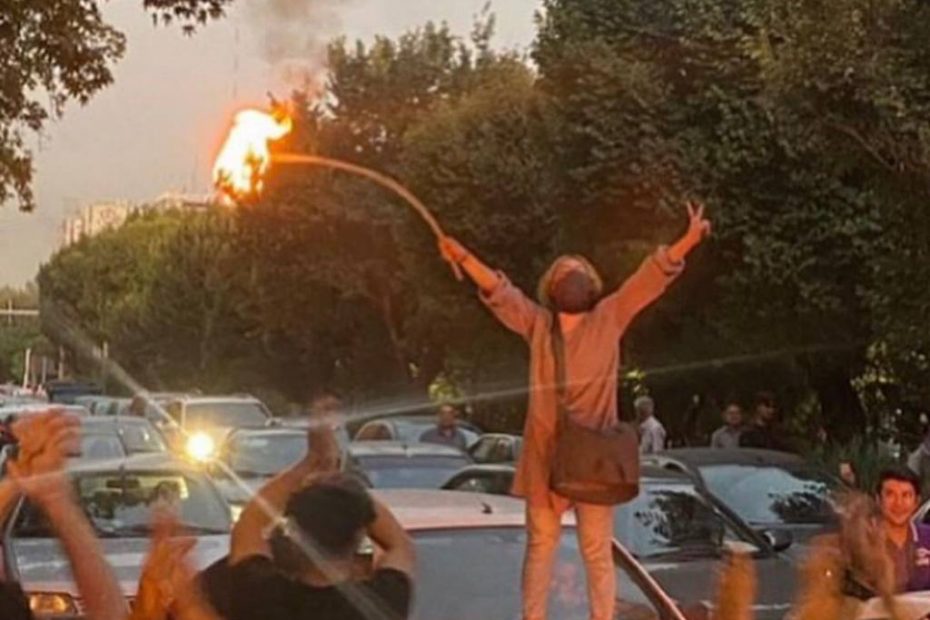 Our Hair as the Flag

A Text by Mahtab Mahboub

The unified voice of protest that can be heard from all corners of Iran these days shows a change in the context of Iranian society. A society that, according to the rulers, is dominated by a traditional culture that demands a special covering from women. Yet, the traditional women’s coverings are distinctly different from the uniform compulsion of veils (black Chador) and Maghnaeh (a kind of Islamic covering for women that keeps the head and chest covered). The diversity of cover was marginalized and demolished by murder, torture and humiliation and in a period of more than three years from the winter of 1980 to 1984, right after the 1979 revolution, along with elimination of the diversity of any other type of being and believing that did not identify with those of the rulers.

However, the daily resistance of women who did not give up their right to live freely continued, from the struggles with Revolutionary Guard Corps and paramilitia that attacked parties in the private spaces of homes, to self-immolation as protest, to the creation of mobile applications that now informs other women about the location of Hijab police on the streets and other public spaces.

The voices of the margins have moved to the center of this feminine struggle.

In these days protests triggered by the murder of a 22 year old Kurdish woman, Mahsa Amini at the hand of Hijab police in Tehran, names and symbols of this long history of feminine resistance is summoned in the joyful dances and burning of women’s scarves, from Dr. Homa Darabi who set herself on fire in 1994 to protest the violence and dehumanization of women , to the “blue girl” who had just tried to enter the stadium to watch a football match but had to choose death, not only to escape the prison sentence, but also the family police, the father.

Now the souls of Rojava fighters with the slogan of Jen, Jian, Azadi (woman, life, freedom) are rejoined with the voice of that Ahwazi Arab woman who shouted at the security forces“our demonstrations are peaceful, why are you shooting at us?” during a protest amid severe drought. The voices of the margins have moved to the center of this feminine struggle.

While previous attempts at mobilizing to change the law through gathering signatures and popular support and sending more female MPs to the Parliament -both organized mainly by activists in the capital- have not gained much success, this wave of protest have obtained the solidarity of many people who are desperate for change.

Navigating the public space with a non/male body is turned into a potential death hazard for many, specially those having to use public transportation because they can not afford a private vehicle, although that does not guarantee a womans safety.

The hijab police never had a very clear code of conduct and this ambivalente is how they keep women in constant fear and the cities unsafe for them!

Parallel to the increased pressure from inflation, unemployment, climate crisis, the unending reports of embezzlement in unprecedented amounts, the state is limiting women’s right to their reproductive rights by outlawing sterilization and free distribution of contraceptives in the public health care system.The same segregation policies that required female personnel for many jobs including doctors, nurses and teachers has created two generations of women who are educated and fed up with their inferior status.

The younger generations of women* are more of global citizens, courageous and demanding of their right to have an unoppressed life. Along side them are fighting (mostly young) men*, who now know that the ruling system of theocracy and their neoliberal policies are not benefiting them either. In the face of unemployment, ethnic and religious discriminations, and impoverization of vast populations coinciding with climate crisis, their patience have waned. They are now representing a new kind of masculinity that supports women’s freedom and amplifies their voice both on the street and in terms of discourses; a masculinity that does not promote itself but holds the space for voices with less access to power, that is women and LGBTQI+ demands.

The new is being born on the streets in Tehran and it is the birth of a feminist struggle!

I think it is quite important also to mention the beautiful solidarity this movement received, from Syrian artists to Femen activists, to our sisters in Afghanistan and Turkey who gave the most amazing support and not only covered us in their media but came to the streets to shout out our shared demands for womens rights and freedom.