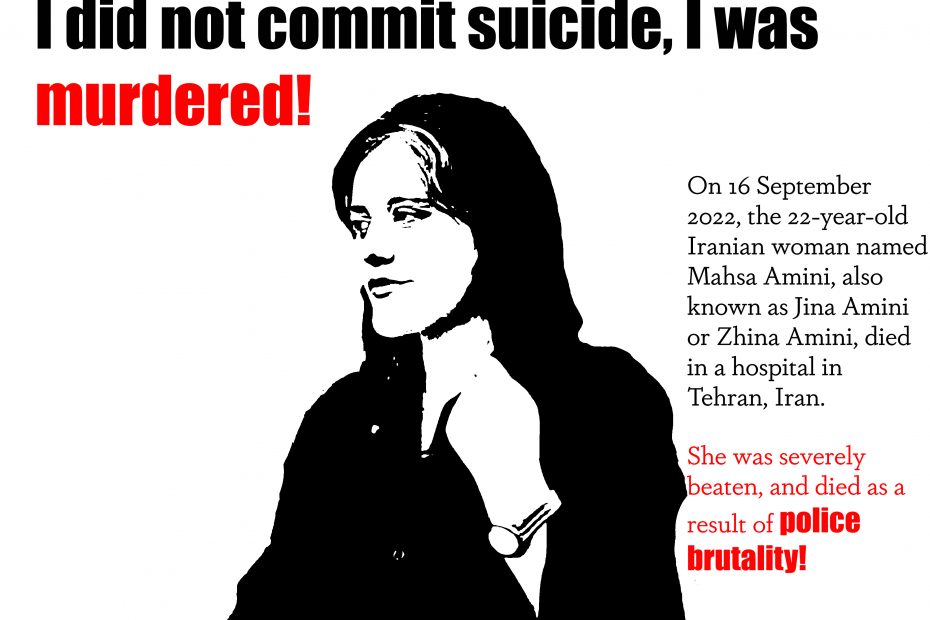 I did not commit suicide, I was murdered!

A text by Rose Aldayeh

Yes we don’t live in Iran, and yes most of the people in our Network are not Iranian, but we too will fight for the iranian cause!

Dear Iranians, Your goverment thinks that it can hide the truth with Lies. If we know the truth here in Germany, then there is no hiding and their lies are so weak as they are.

Go on with your protests and don’t stop until you gain your freedom that you deserve.  We support you and we will be your voice here.

Even if Ali Khamenei, the Supreme Leader, or his followers tried to shut down your Internet or spread propaganda about your revolution, they can never shut down your voices.

In this context, the Coordinating Council of Iranian Trade Union Organizations announced a three-day national mourning and said in a statement titled „You are drinking the blood of the country’s youth“: „You rulers and perpetrators of systematic oppression have killed a number of innocent students in this country during these historic days. With hearts full of hate and hands stained with blood“.

Mahsa Amini, also known as Jina Amini or Zhina Amini was not the first victim of brutality and unfortunately children are not excluded from this injustice. The nongovernmental organization Amnesty International said Oct. 13 that security forces and police killed at least 23 children-20 boys and 3 girls-by gunfire or other violent means during nationwide protests in Iran.

The Iranian government is spreading myths about Zhina Amini’s suicide. Mahsa did not commit suicide, but the police beat her to death. The coroner who issued the death certificate cold-bloodedly told her father to keep quiet. Mahsa’s father, Amjad Amini, will not be silent, and neither will we. Mahsa is our sister, and we will not allow anyone to change the facts. Zhina is our daughter, and we will not forget her no matter what, and we will never forgive the brutal dictator and his men.

All our condolences go out to the Amini family. Your daughter did not die for she is alive in our hearts. She is a symbol of sacrifice, strength and courage. A heroine is the least we can say of her. May God have mercy on her and may she rest in peace. our condolences also go out to all the other families who lost members during the protests. Their sacrifice is priceless and will certainly not be in vain.

Injustice in Iran today is hidden behind religion. Islam rejects injustice. God is not pleased with the killings and crimes against people, but those in power believe they can deceive the world by growing beards and claiming to know God. Allah says, „“Whoever kills a person [unjustly]…it is as though he has killed all mankind. And whoever saves a life, it is as though he had saved all mankind.”

Poor Amini was unjustly taken away from her family and friends. The morality police killed her, because they don’t know what morals are. They claim to be religious even though their God is not Allah but Khamenei, and they will do whatever he tells them to do even if it goes against all the spiritual values of their religion. No matter what we do, we cannot change the past and bring her back. What we can do is fight and spread awareness so that this never happens again.

Since his true face was shown to the world, the whole world demands the fall of Khamenei and his regime. he knows no God and worships only himself. As a leader, he has not only abandoned his people, he has even turned against them with cruelty.

The role of a leader is to lead, not to oppress. We demand that he be convicted in court for all the crimes he has committed. For the justice of Zhina Amini and all the other victims, he should spend the rest of his life in prison.

Every police officer who has committed crimes against innocent people should also suffer the same fate.

All the doctors and forensic physicians who cover up these crimes must not be forgiven either.

The Iranian people deserve freedom and will obtain it, God willing. Your revolution continues until victory!