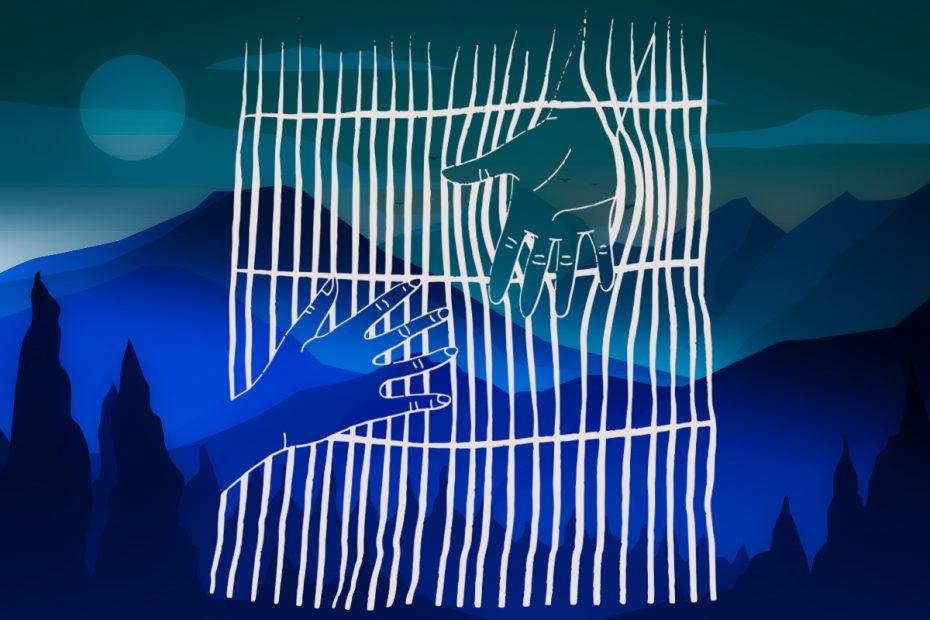 No Friends, Not Even the Mountains…

An article by Mahtab Mahboub, inspired by „No Friend But the Mountains“, a book by Behruz Booachani.

The actor shouts in my ear as I walk amid total strangers who speak in a language I have only partially learned in the last few years and still stammer when speaking it. The Kurdish actor – with a mildly exaggerated emotion in his voice that is his trademark – narrates the Persian words of an “illegal – Kurdish – immigrant”, Behrouz Boochani fleeing Iran to Indonesia, surviving his second try of crossing the hazardous ocean only to end up in the Manus Island Regional Processing Centre in 2014 and was forced to stay there until 2019. The prison originally established in 2001 by the National-Liberal coalition government was closed in 2008 by the Australian Labor Party only to be reopened by the Gillard government, also from the Right faction of the Labor Party in 2012. The idea was that asylum seekers sent to this island would stay there forever, living their life in vanity, with no opportunity for work, education, self-development! In an incident Boochani describes how the officers violently destroyed a backgammon that the prisoners had made themselves with the bottle tops; it was Forbidden to play and games there! The zero-tolerance „stop the boats“ was the slogan with which the Liberal-National coalition won the next election. Then they changed the title of Minister for Immigration to the Minister for Immigration and Border Protection, putting a secrecy policy in place and giving no information on the arrival of asylum seekers’ boats. However, no sooner was Manus prison closed than at least 9 people died there, mainly due to inadequate healthcare or by suicide. To this date, the Australian borders have remained almost exclusively “closed” to refugees, even during the pandemic. What can be more appealing than “nationalism” when it comes to closing eyes on the loss of life at the maritime borders, lives of people fleeing prosecution, devastating poverty and disasters caused by climate change in which they did not have even the slightest role?! I wonder what is liberal about the liberal-national coalition, maybe the liberty of turning a blind eye on the suffering of those who drawn in the ocean or those -as young as 12 years old- who commit suicide or self-harm in such detention centers.

I can see on the telegram app that I have listened to Boochani’s story for more than 6 hours now. This is longer than the time the flight takes from Tehran to Düsseldorf, the flight I took after having waited for a family reunion visa that was promised to take 8 weeks but had taken 7 months to be issued. Among thousands and thousands with a similar faith, it is an absolute miracle that Boochani managed to tell his story, that his story was widely heard, and brought him the offer of refugee status in New Zealand. Before his journey and landing in Manus, he must have really known the taste of discrimination, dehumanizing mechanisms within his own nation-state. After all he is a Kurd from Iran. Yet Kurds are not the only ethnic minority in Iran who go through hardships caused by the oppression of the centralized government. At its birth, the Iranian nation- state narrative reconstructed Arabs and to a lesser degree Turks as its “other”. Anything that had to do with the “Muslim conquest of Persia” by Arabs in the seventh century A.C was to be blamed for underdevelopment of the contemporary Iran and thus hated and oppressed. This “othering” has spanned the last one hundred years and has led to extreme disparity within the Iranian borders. Arabs -natives of southwestern Iran, Khuzestan (Al-Ahwaz as the natives call it)- are going through the tenth day of water shortage protests. Ten people have been shot dead during the protests, hundreds injured and don’t dare to go to hospitals and hundreds more arrested. The unprecedented water crisis is not only caused by climate change but also intentional policies aimed at forcing Arabs to leave and extract oil -among other uses- in their lands. The rivers there were diverted towards dry areas in the middle of the country, the Persian speaking ones. To nobody’s surprise the farmers and stockbreeders of these dry areas are also protesting the unemployment and damage caused to them due to the denial of their share of water. In addition, and in the first act of solidarity among two ethnic groups within Iranian borders, Turks in Tabriz, Northwest of the country protested in thousands yesterday. The slogan on the street was calling the area with its native name (Al-Ahwaz), unbearable to nationalists in the government and the opposition forces alike. The Turks know that, at the end of the day they share the same faith with Arabs, in terms of allocation of resources nationwide if they remain silent today. The regime had tried to turn many cities in the Azerbaijan province to garrisons with unbelievable levels of security, using plain clothes, anti-riot forces, even filmed the protests by drones for the first. They had already arrested some activists who could potentially organize the protests. Despite all these efforts, so many people risked to shout on the street: freedom, justice, a national state.

These are not the first waves of protests in the recent years in Iran, but will it be suppressed like other ones or is it just the beginning of an end? In the last huge wave of protests in November 2019, it is said that 1500 people were killed, many arrested; some of them are to be executed. For those who survive, even those who are silent now, what are the choices? Will they have to try to escape this destitution through fleeing the country, drowning at the beautiful Mediterranean sea or pacific ocean? Will their stories be heard like that of Behrouz Boochani or that of Alan Kurdi or will they disappear as if they never fought and loved life? Will a global solidarity help them to be at least heard?

NO FRIEND BUT THE MOUNTAINS – Writing from Manus Prison on buecher.de

The article graphic was partly stolen from ract-festival.de. Thanks!