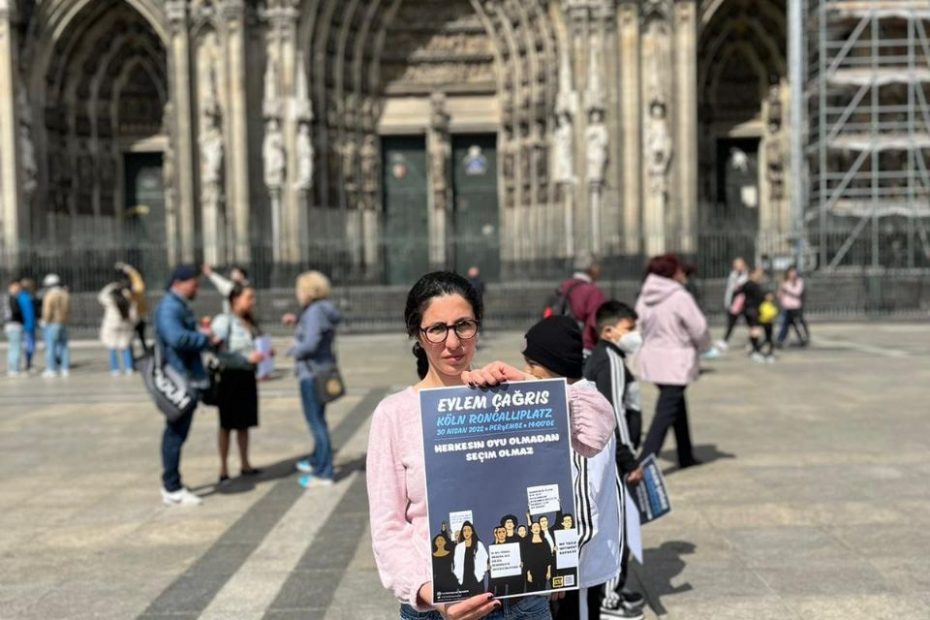 An article by Mahtab Mahboub

1. On the 1st of May 2017, I arrived in Germany. International Workers’ Day is also the date my mother’s uncle had chosen for his birthday, ever since he was shot in a workers’ rally in 1946, in which 14 workers were killed and 120 more wounded by the police. Back then an extensive bureaucracy to issue and control the accuracy of birth certificates was just being developed. He used this date as an excuse to celebrate the occasion of International Workers Day every year he was in jail. At the end, shortly after the 1979 so-called revolution and as any political activism for the opposition was totally banned, he went underground. He eventually had to flee Iran in 1983 through the mountains at the border of Kurdistan and Turkey and still today lives in exile in Paris. Who leaves their homeland enjoying themselves to their heart’s content?

2. In October 2016, I applied for a family reunion visa to join my husband who had left in May that year to Germany. As the scholarship provider (German Academic Exchange Service, DAAD) had planned, he needed to learn German for five months in Cologne and then move to the city of E. and start studying for his PhD in the university he was admitted to. The officer at the embassy in Tehran tells everyone that in 2 to 8 weeks they will hear about the result of their visa application; whether they are issued a visa or rejected for reasons that they are not obliged to tell you! I didn’t register for continuing my German lessons because I thought it would be a waste of money as I was leaving in a month! I was safe and secure at my parents’ house and could somehow financially survive the next 6 months of doing nothing but waiting for the call from the embassy – privileges that not every person whose life is suspended for six months has! I also could not commit to any jobs or any other long-term project because the embassy kept telling me that there was nothing they could do, that the decision was to be made in Germany and that they didn’t know what the problem was either.

3. For my husband, who was in the meantime dealing with the Ausländerbehörde (Citizenship and Immigration office) in the city of E, matters were even more “complicated” -to say the least. In response to his inquiry about the status of my visa application, he was told “We are in Germany! Everyone should show up personally for their errands, you are not permitted to inquire about your wife’s application, this is her personal matter, tell her to come here herself!” Aren’t all brown men trying to oppress their wives -even in their absence- by denying them of having access to their documents and information about their applications within the German bureaucracy? The citizenship and immigration office in E. is very notorious for taking forever to give newcomers an appointment for registering and extending residence permits. So notorious that the scholarship administration in Cologne is already used to arrange an extension of residents permit for their grantees before they leave to E. to keep them out of trouble while waiting for the appointment in their new city. And of course, you need to speak German at the citizenship and immigration office regardless of the fact that it is an office for the newly arrived “foreigners”! It was finally and luckily through the help of DAAD scholarship coordinators that we found out the cause of all this perplexity and the Ausländerbehörde asked for my husband’s documents to be
transferred to E. It took then just two days for them to issue me the visa. I don’t know how many protests were held against this office and their mistreating applicants; I attended two of them in 6 months. Then we learnt that they have now employed 22 new officers; we can’t wait to see how this shortens the appointment dates.

4. We were stopped at the airport as the police officer there noticed that I had lived in Germany for five days without a residence permit. The stamp for the visa renewal in my passport ended on 25th October and the next one started on 1st November. Carrying my 2-year-old, I had to go through all my emails to find the “Fixionbescheinigung” letter for that period to prove I was a “legal resident” while waiting for my appointment! I can’t even imagine how it feels to live with a Duldung (temporary suspension of deportation)! How traumatizing and terrifying it should be to anticipate being rejected at any entrance, and to have to remain where you are without any self-determination right!

5. After six years of having lived in Germany, a child, an unlimited job contract, having paid pension and taxes, having conducted PhD studies in this city, holding the language certificates and other pre-requirements decided to apply for German citizenship, we decided to make an appointment again with the “Einbürgerungsteam” (Naturalization Office) of the city E. This is part of the response: “You have contacted the Naturalization Department of the Foreigners‘ Registration Office of the City of E. by e-mail regarding a matter. Due to the large number of inquiries, it may unfortunately take some time to answer your e-mail, as mail received in this way is also answered in the order in which it is received….In the meantime, please refrain from inquiring about the same matter…Multiple inquiries unfortunately lead to additional work here, which increases the duration of the processing time…– However, due to the high demand and the space limitations caused by the Corona pandemic, requests for appointments for counseling sessions unfortunately cannot be considered in a timely manner. The same applies to applications received by mail…We apologize for the resulting delay. We are well aware of the unsatisfactory situation but hope for your understanding.” Maybe they need to employ 22 more people as well? We know now that the experience would be different had I come from a neighboring European country!

6. In the past months, we have witnessed how (civil society as well as state run) institutions categorized refugees into “good, deserving ones” and black and brown ones. The loud voices criticizing this white supremacy want more than “compassion and empathy” from you! They are leading the society in the direction of a political community in which, as Arendt put it, “we are judged not through the characteristics which define us at birth, but through our actions and opinions, by what we do and say and think”! The empathy logic, the altruism, the “it could have been me or my relatives” logic doesn’t work in this context. You will not be drowning at the Mediterranean, nor will you be tripped by a camerawoman at the Hungarian border while holding a child in your arms. Yet, for any “human togetherness” to be possible or even imaginable, for a society to which we all feel belonged, everyone must actively contribute. We are tired of talking to ourselves, listening to ourselves, pushing ourselves out of burnouts just to see that we are our own audience while not having the fundamental right for political participation, the “right to vote”. Linked with a pain each of us experienced individually, we always see BIPoCs “like us” in our struggles, fights not just for our rights but also for human equality and dignity in the society we live in. As Yvonne Esi Müller, from Die Urbane party had to cry out in our latest rally, we need to ask “where are you people? You, the people taking selfies with the Dome but leaving us unseen and unheard?” At the face of a state and political parties always flagging alterity and making the other’s difference dangerous to unity and co-existence, we have no way but to develop a political narrative that represents non-citizens neither a cultural decorative object, nor a threat but a valid and relevant social agent. We need a political discourse that makes building up solidarity and coalitions possible but doesn’t put the burden of doing so only on the most oppressed with the least access to resources. For this very same reason that you are not the fleeing refugees, You have the responsibility to listen and to raise your voice for an inclusive democracy. Stand with us in our fight for gaining the right to vote, for remembering that it is a right and not a privilege exclusive to the people with the right passport, belonging to the special class, identifying with the socially recognized norms of a gender! You can vote and you can vote in favor of “life”!

7. “Thou shalt not kill”! This is what a human face says to the other (in Levinas’s words). With the vulnerability of a deviant to the nation, and at the face of the violence that makes us invisible, my story is my face and tell me, what response should I expect from you, the White Person Who Needs to Be My Friend, But Doesn’t Know It Yet?